Arizona Gives is a collaboration between the Alliance of Arizona Nonprofits and Arizona Grantmakers that began in 2013. Arizona Gives helps people find, learn about, and contribute to the local causes they believe in, like Ben’s Bells. They help raise awareness about the critical role Arizona nonprofits play in our communities and inspire people to give generously to nonprofits making our state stronger, creating a thriving community for all.

Ben’s Bells was founded in Tucson, and we are proud to be one of Arizona’s longstanding nonprofits. Ben’s Bells teaches individuals and communities about the positive impacts of intentional kindness and inspires people to practice kindness as a way of life. Our programs are based on the belief that everyone has the capacity to be kind and that kindness can be cultivated through education, visual reminders, and ongoing practice.

Donations are taken through the Arizona Gives Day website. Each donate link below will take you to the location where you can make a donation. If you would like a reminder on Tuesday, April 5th, please select an “add to calendar” link below.

Thank you for investing in creating kinder communities on Arizona Gives Day and every day. 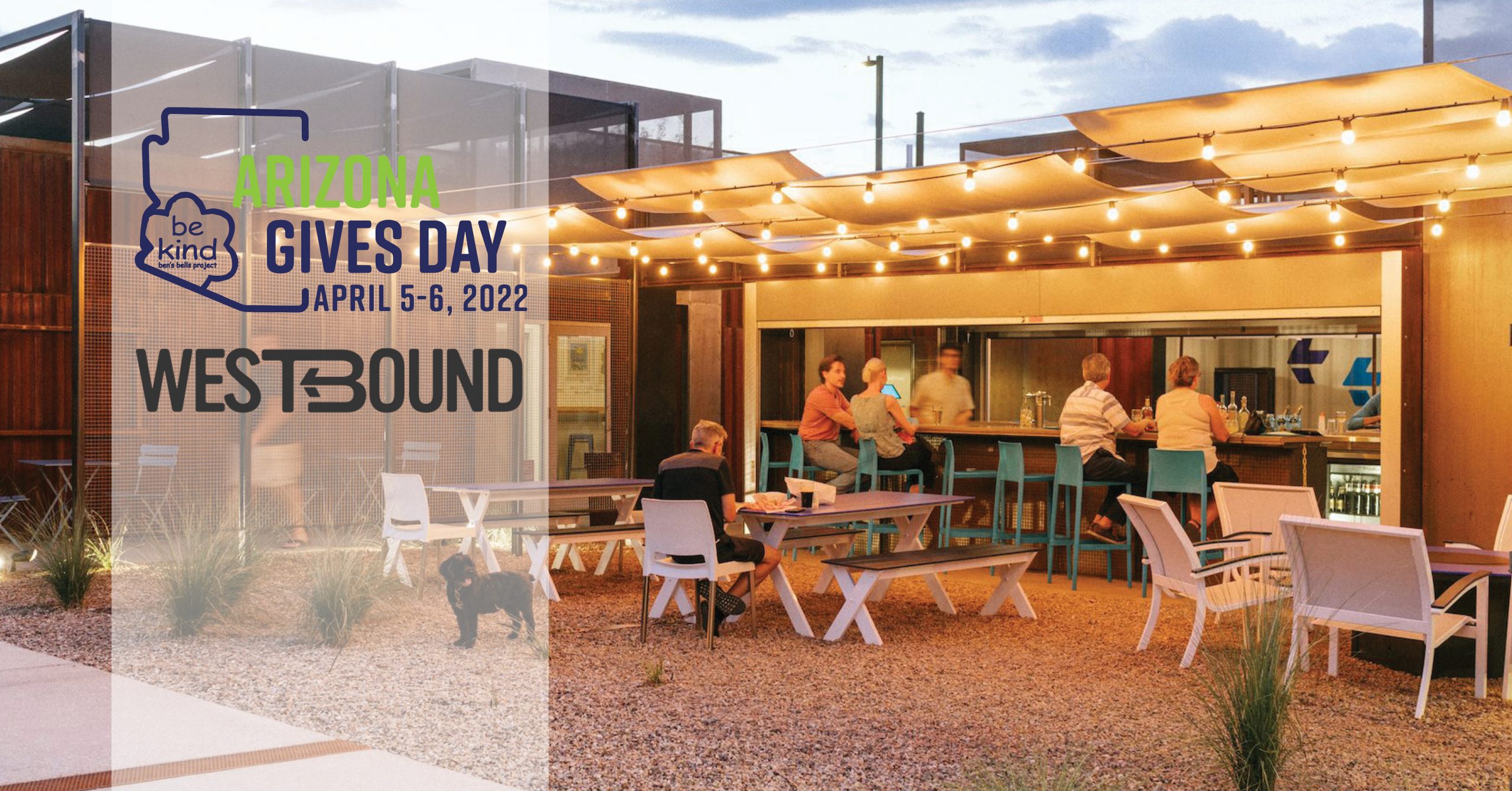 Invest in person! Join us at Westbound on Tuesday, April 5th from noon until 8pm. Ben’s Bells staff and volunteers will be there to answer questions and collect donations.
Best part? Westbound will be donating 10% of all proceeds and Beaut Burger around the corner will also be making a donation!

In 2002, Jeannette Maré’s life changed forever when her son, Ben, died suddenly just before his third birthday. In the months following his death, Jeannette and her friends and family began making ceramic wind chimes – the first Ben’s Bells – in her backyard studio. Being surrounded by our supportive people and working with clay toward a common goal was therapeutic for her family and their healing.

During this time, Jeannette learned how a small act of kindness could make such a difference in a person’s life, no matter their background. She wanted to find a way to teach others about the impact of intentional acts of kindness, and so the idea for the Bell came to life. Jeannette and her friends made four hundred Bells and randomly distributed them in the Tucson community on the first anniversary of Ben’s death. Through these Bells, she had found a way to pay forward the kindnesses that had been shown to her.

This started a powerful ripple effect. People who found the Bells shared their own stories of grief and healing and hope. The local newspaper printed the story on the front page. School groups and businesses and individuals started calling to see how they could get involved and soon, thousands of Tucsonans were helping to craft Ben’s Bells.

Since 2003, Ben’s Bells has been operating as a nonprofit, growing kindness education programs and continuing to distribute thousands of Bells every year. In 2015, Ben’s Bells opened its first studio in Phoenix, extending our mission further into Arizona. Today Ben’s Bells has four studio locations (three in Arizona) that distribute Bells all over the world and we’ve reached over 1.5 million students, faculty, and staff through our free Kind Campus programing.

It’s beautiful to see how a tragedy has inspired kinder communities starting in Tucson and extending throughout Arizona and beyond. Over the past 20 years you have stepped up to invest in Ben’s Bells and prove how important kindness is to Arizona. Help us continue to inspire kindness by making a donation today.

It’s amazing when kindness and art become a part of someone’s life story.

Catalina Magnet High School was the first school to bring Ben’s Bells onto campus for an assembly during the 2021-2022 school year. After the kindness assembly, we were invited back by the Advancement Via Individual Determination (AVID) group to do more kindness activities. The AVID group focuses on College Prep for students who would be the first in their family to attend college.

One glazing (painting) technique taught to the group was called glitter glazing. The technique uses small bits of recycled glaze that create beautiful colors on the coins. The finished effect is similar to sprinkles on a cupcake. It’s a fun technique that allows us to use the leftover glaze that would otherwise be thrown away to create something beautiful.

During our visit, a student had just learned that she had received a scholarship to any in-state school due to her hard work and perseverance. She was very intrigued by the unique technique and asked many questions on its significance. At the end of the day, she shared with our staff how the AVID group was similar to the leftover glaze. Many people had given up on them and felt they would never succeed. She promised to make something beautiful and significant with her life because of the love, kindness, and commitment she had received from her AVID teachers. This visit had a great impact on her and she committed to always putting kindness first.

These are the types of students and inspiring stories that your investment helps to flourish! Help us continue to inspire kindness in our communities by making a donation today.

Throughout the year, Ben’s Bells receives illustrations of kindness from students attending schools who embrace our Kind Campus program. Select drawings are used for inspiration in creating Ben’s Bells Stepping Stones. Others are used on merchandise sold in Shop Kind. Some of the more complex designs show the growth and understanding involved in the practice of intentional kindness. This includes the act of being kind to others by offering help, being respectful, playing with new friends, and empowering them to be the change they want to see in the world.

It’s beautiful to see how students of all ages and backgrounds interpret kindness. Over the past 20 years, Ben’s Bells has reached over 1.5 million students, faculty, and staff through our Kind Campus program. When you invest in us, you are ensuring we have the support needed to provide Kind Campus programing free to all schools. 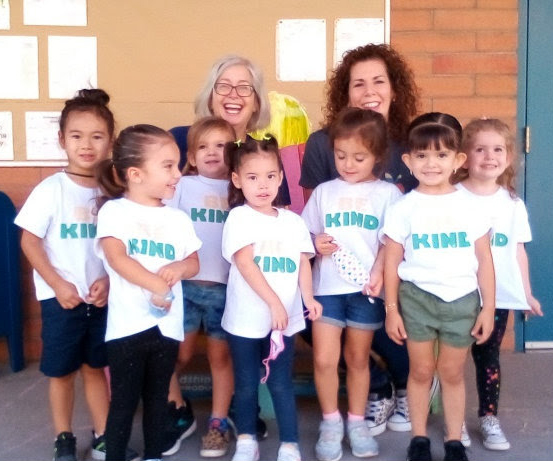 Christ Church School (CCS) makes it a priority to teach their students about the importance of kindness. CCS classes discuss the power of kindness, read stories and do activities that foster kindness. The students learn to share kindness with those around them – at school and in their communities.
During the pandemic, they were able to convert many of the Kind Campus materials to appeal to preschoolers, giving them the opportunity to teach kindness starting at an early age. They even went a step beyond and created a kind reading list including some of our favorites from Shop Kind:
Everyone has the capacity to be kind. Being kind is a skill that can be taught and practiced, that’s why Ben’s Bells offers Kind Campus materials free to schools year-round all over the country. Your investment in Ben’s Bells has provided the resources needed to reach over 1.5 million students, faculty, and staff over the past 20 years. Make a donation today to help us reach more communities.
Donate